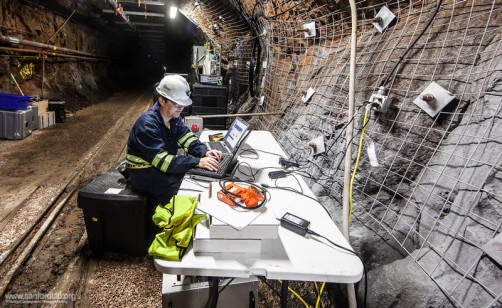 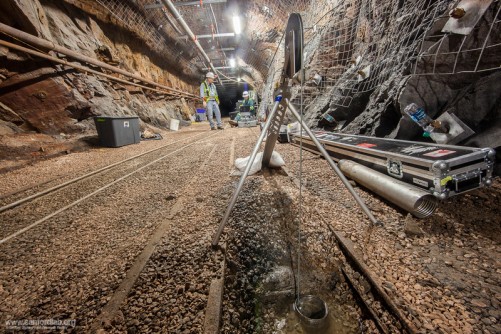 Berkeley Lab researchers have deployed various tools to collect data on the boreholes they drilled at kISMET, a rock observatory a mile underground at the Sanford Underground Research Facility in South Dakota.

Newswise — About a mile beneath the Earth’s surface in an old gold mine, Lawrence Berkeley National Laboratory (Berkeley Lab) scientists have built an observatory to study how rocks fracture. The knowledge they gain could ultimately help reduce greenhouse gas emissions and accelerate deployment of clean energy technologies.

The observatory is part of a Department of Energy (DOE) initiative that seeks to address challenges associated with the use of the subsurface for energy extraction and waste storage. Dubbed SubTER—or Subsurface Technology and Engineering Research, Development and Demonstration Crosscut—the initiative recognizes that the United States currently relies on the subsurface for more than 80 percent of its energy needs and that adaptive control of subsurface fractures and fluid flow is a crosscutting challenge that has the potential to transform energy production and waste storage strategies.

“As important as the subsurface is for U.S. energy strategy, our understanding of how the subsurface responds to common perturbations, such as those caused by pulling fluids out or pushing fluids in, is quite crude,” said Susan Hubbard, an Associate Director of Berkeley Lab who helps lead the SubTER National Laboratory team. “We’re not able to manipulate the subsurface with the control that can guarantee that we’re not only maximizing energy production or waste storage, but that we’re also protecting our environment—including minimizing greenhouse gas emissions, impacts to groundwater, and induced seismicity. That’s a significant gap.”

Scientists at several of the Department of Energy’s national labs are contributing to SubTER, which was launched last year after Energy Secretary Ernest Moniz identified adaptive control of the subsurface as one of the DOE’s “grand challenges.”

“We know the subsurface will still be a big part of our energy strategy for many decades to come,” said Hubbard. “We launched this initiative with the recognition that, whether it’s old energy strategies like oil and gas or new strategies like enhanced geothermal or carbon capture and sequestration, we have to really gain control of the subsurface.”

One key to gaining control is understanding how rocks fracture, in order to control it or prevent it, depending on the application. “We’re concerned with the ability of fluids to move through cracks and pores,” said Berkeley Lab geologist Patrick Dobson. “For some applications, such as engineered geothermal systems, you want fluids to move in order to mine the heat from the subsurface, so you want to create fractures. In others, such as carbon capture and sequestration, we’re more interested in making sure fractures don’t grow.”

To gain a predictive understanding of fracture control, Berkeley Lab is leading a SubTER project to develop an underground observatory and to conduct integrated experiments and geophysical imaging. The underground observatory is located at the Sanford Underground Research Facility in South Dakota, the site of a former gold mine that is now primarily a research lab for particle physics. The Berkeley Lab team chose one part of the facility at 4,850 feet below ground to set up their observatory, dubbed kISMET, for permeability [k] and Induced Seismicity Management for Energy Technologies.

Getting Energy By Understanding Rocks

Co-led by Dobson and Berkeley Lab geologist Curt Oldenburg, the kISMET team has drilled and cored four 50-meter-deep monitoring boreholes and a 100-meter-deep experimental borehole. “We are essentially trying to understand the relationship between the stress field, rock fabric, and fracturing,” Oldenburg said.

The scientists injected small amounts of water into the rock at very high pressure until the rock fractured. “We are looking at the pressure which creates a new fracture, and the flow rate and volume of water that goes into the fracture to estimate its size,” Oldenburg said. “Then we go back with borehole logging tools to determine the orientation of the fracture. At the same time, we are carrying out some detailed monitoring of the fracturing process. In particular, we are measuring the rock electrical resistivity in near-real time and the rock seismic properties. We are also measuring microseismicity associated with the fracturing.”

The kISMET experiments are most relevant for Enhanced Geothermal Systems (EGS), a clean energy technology where underground fractures are engineered in hot rocks in the subsurface in order to inject water and extract heat. EGS has the potential to generate enough clean energy to power millions of homes, but scientists still need better methods for managing rock permeability.

The rock at the Sanford Lab is similar to the deep crystalline rock found in many geothermal systems. “One of the key challenges is understanding the state of stress of the rock, which is likely to govern the direction in which the rock is likely to break and where it will do so,” Dobson said.

Besides geothermal energy, kISMET will be relevant to a number of other applications. “Fractures and their relation to stress and rock fabric are very important to carbon sequestration, oil and gas, and nuclear waste isolation because fluid flow often occurs preferentially in fractures,” Oldenburg said.

The experiments could also be useful for better understanding the seismicity that results from disposal of large volumes of water produced by unconventional oil and gas wells created by “fracking”; the injection of wastewater has been known to result in small earthquakes. “At kISMET, our sensitive instrumentation will be able to detect microseismicity associated with our water injection experiments,” Oldenburg said. “We can learn about detecting and locating microseismic events in deep crystalline rock from our highly controlled experiments.”

Besides kISMET, DOE recently announced it would invest $11.5 million in eight SubTER projects focused on advancing geothermal energy and carbon storage technologies. Berkeley Lab scientists will participate in two of them, including a $684,000 project to deploy and validate GPUSA Inc.’s carbon dioxide monitoring system and a $1.5 million project to use passive seismic emission tomography to advance the imaging and characterization of geothermal permeability at the San Emidio geothermal field in Nevada.

Berkeley Lab’s geophysical imaging capabilities are just one of the strengths they are bringing to the challenge of adaptive control of the subsurface. “We have a full range of fundamental through applied geoscience expertise,” Hubbard said. “At the fundamental side, we have the ability to explore how hydrological, geomechanical, and geochemical components interact to yield a composite response to a perturbation. On the applied side, we are able to use our Geosciences Measurement Facility to test theory, sensors, and models under relevant pressure and temperature subsurface conditions. This range of capabilities is needed to advance our ability to manipulate the subsurface with confidence.” 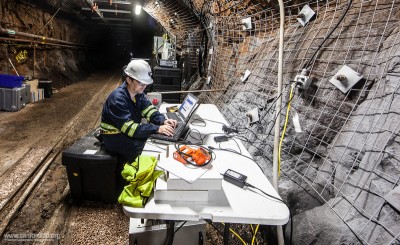 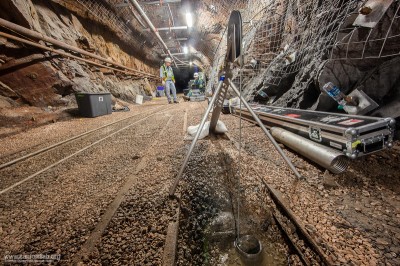 Caption: Berkeley Lab researchers have deployed various tools to collect data on the boreholes they drilled at kISMET, a rock observatory a mile underground at the Sanford Underground Research Facility in South Dakota.